The new issue of REH: Two-Gun Raconteur has hit the streets (I got my lovely copies in the mail this week). REH: TGR No. 16 is chock full of the high quality Howard fiction, essays & artwork you can expect from the hard-working Damon Sasser. 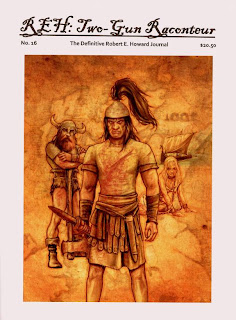 Some highlights from No. 16, are Howard's own works, "The Diablos Trail," a Pike Bearfield tall-tale Western. Patrice Louinet continues the tall-tale theme with a look at the text behind A Gent from Bear Creek, the only Howard novel published in his lifetime. I take a look at one of Howard's dramatic Westerns, "Wild Water," a tale of revenge & madness in Depression-era Texas.

Rob Roehm brings his remarkable research talents to bear on the Lone Scouts and Howard's circle of friends known as the Junto.

There is also poetry by Barbara Barrett and Morgan Holmes' review of Griots, a Sword & Soul anthology, as well as lavish illustrations by David Burton, Terry Pavlet, Michael Peters, Dave Houston, Bill Cavalier and many others. The print run is 200 numbered issues, so order your copy today.

REVIEW: WHITE SUN OF THE DESERT

In the late ‘60s Vladimir Posner (father of Phil Donohue’s buddy), the boss at Mosfilm Studios wanted to make a western. He gave the job to a pair of screenwriters, Valentin Yezhov and Rustem Ibragimbekov. What Posner got back was not exactly a Western, but the very first Eastern.

Yezhov and Ibragimbekov transposed the Western cliches into a distinctly Soviet setting. Instead of a cowboy, the protagonist is a Red Army soldier, instead of the War Between the States, the era is the Russian Revolution, instead of Indians or bandidos, the antagonists are basmichi, Turkmen rebels. The result is a classic adventure tale told in a distinct and refreshing style.

Sukhov (Anatoli Kusnetsov) is a Red Army soldier on his way home. In the middle of the desert he finds a man buried up to his neck. This is Sayid (played by Spartak Mishulin), who, once rescued, promptly departs vowing revenge on the outlaws that killed his pa.

No sooner does Sukhov get underway than his is diverted again. This time he must guard a group of women rescued from the harem of Abdullah (played by Kakhi Kavsadze), a basmichi chief. Sukhov’s only help comes from Petrushka, a young private and Vershchagin, a former Tsarist customs officer.

Motyl takes a light approach to White Sun of the Desert. The film is part comedy, part action movie, with as much of the feel of a Russian folk tale as of a Hollywood shoot-‘em-up. White Sun was an instant hit in the USSR (thanks to an enthusiastic review by First Secretary Brezhnev) and is the prototype of the many “Easterns” that followed. This is perhaps one of the most accessible of that genre for Western audiences. I recommend it for someone looking for a departure from the usual Hollywood fare.

The Ginger Star
The Hounds of Skaith
The Reavers of Skaith

Leigh Brackett is my favorite Sword & Planet writer. Erik John Stark is like Tarzan, on Barsoom, as re-imagined by Raymond Chandler for a John Ford Western. But like Tarzan and cowboys, planetary adventurers need space. The problem is that in her lifetime Brackett scientific exploration overtook her. Mars rovers made it all too plain that the Red Planet hosted no lost civilizations, no ruined cities on the edge of drying seas, no silver-prowed galleys sweeping through ancient canals.

So Brackett just moved her hero a little deeper into space. The early Stark stories featured colonialist earthmen with spaceships, so why not get out of the solar system altogether? Stark is sent to the planet Skaith, out where Earth’s influence is at its ragged edge. Skaith is a dying planet under a dying sun. The whole dying thing speeds up when the locals piss off Stark.

Just as Stark’s Mars is a distinct take on Barsoom, Skaith owes a certain debt to Vance’s Dying Earth and perhaps to Flash Gordon’s duel with Ming the Merciless. It is a world under a theocracy. The Lords Protector and their enforcers the Wandsmen  enforce a rigid sort of wealth transfer between the shrinking base of producers and the class of wandering parasites called the Farers. Moreover, on Skaith humanity has fragmented, morphing their forms adapted to the environment at the cost of having anything in common with their fellows. Culture is fragmented as well, consisting of isolated and backward city-states. But there are prophecies of a Dark Man who will overturn the world.

Stark does some overturning alright. He’s there to look for a friend who disappeared while helping some of the productive people escape the tyranny of the Wandsmen. The novels are a series of adventures as Stark wanders Skaith giving the Lords Protector hell. It’s a bit like a hard-boiled movie serial.

The real secret is that Skaith is Earth, specifically America c. 1970. The Farers are hippies gone feral, the Wandsmen are the PC police of a decadent welfare state. It’s an interesting take though perhaps your mileage may vary. I rather liked the Skaith novels, though I find the early Stark tales, rooted in nostalgia rather than insecurely clinging to it, better.

Email ThisBlogThis!Share to TwitterShare to FacebookShare to Pinterest
Labels: SF, Sword and Planet

Barington Bayley’s novels are about exploring ideas, in this case its high-stakes gambling. The stakes are high indeed for Scarne, a renegade mathematician working as an undercover agent to infiltrate the Grand Wheel. The Wheel is a consortium of gamblers, part Vegas, part Mafia. They are the alternative to the Legitimacy, the inter-stellar empire.

You’d thing the guys with blasters would have it all over the guys with cards, but the Legitimacy is engaged in a losing war with the Hadraonics. The complicating factor is they are fighting in a region where stars go super-nova without warning. Military commander Hakandra is relying on semi-mystic powers of a youth named Shane to understand when stars will explode.

Both the Wheel and the Legitimacy seeks  to control the unpredictable, the Wheel the turn of cards in a game where the rules change from second to second, the Legitimacy the forces of nature and the course of war. Underneath the fast-paced space adventure is a meditation on powers that seek to control the uncontrollable and the manner in which they gamble with the lives of others.

Cornell Woolrich is closely linked with the roman noir of ‘40s America. The archetypal noir takes place in a big city, a sooty Northern town, or a sun-lit California dreamscape. In Waltz into Darkness, Woolrich winds back to the South of the late 19th century. It’s a world of rigid social codes, a bit archaic, tradition-bound, and old-fashioned. Woolrich dives into it, but doesn’t shed his bleak outlook along they way.

Louis Durand is a successful man, but one who has missed the true meaning of success, love. But someone has stepped into his life, Julia, and their waltz begins. In true Woolrich style, happiness is elusive. Woolrich’s castles are all built on foundations of air. Reality is elusive too, but love and fear are mankind’s constant companions, the mainsprings of action.

Durand discovers that the love he thought he’d found is not what he had imagined. The reader follows him on a journey of self-discovery, fraught with suspense and  terror. Who is the Julia that Durand loves, and if she is not that person, does he still lover her. The reader is left guessing until the very end, just as much as Durand is.

REVIEW: A BARNSTORMER IN OZ

PJ Farmer was obsessed with the history of spec-fic, his stories cheerfully plunder pulp SF, Tarzan, Alice in Wonderland, Doc Savage, and of course Oz. And by Oz, I mean the novels written by L Frank Baum at the turn of the 20th century, not the (justly famous) movie.

A Barnstormer in Oz tells of Dorothy’s son, Hank, now a grown man making a living putting on airshows in the heartland. Then he flies through a green cloud and finds himself in Oz.

Only we’re not in Oz anymore. Farmer knows Baum’s works inside and out, so for those who have read beyond The Wizard of Oz may expect to find a lot of Easter eggs.  Farmer doesn’t stop there though, he creates a mythic past for Oz involving ancient races and migrations of alien life forms from alternate dimensions. He also finds a linguistic basis for Quadling (a language related to Munchkin) in Gothic (it’s a real language, not just a subculture for kids with dyed hair and too much makeup, and in the late Roman empire a Gothic priest, Wulfila, translated the New Testament into Gothic) that would make Tolkien proud.

Not that Barnstormer is some dry academic tome. Frankly it has more sex and violence than a lot of novels, and a lot more than you might expect in a tribute to a children’s classic. The pace moves at breakneck speed as Hank helps Glinda the Good with an invasion from Earth in the form of the US Army and all-out war with the Wicked Witch of the North.

Honestly, I enjoyed the book, yet I was a bit put off at the same time. Does one really need to know the details of birth-control in Oz? Or the exact nature of the magic that animates scarecrows? Barnstormer is a gritty tale, with the horrors of war conveyed in grim detail. The quaint folk you saw cavorting on the Yellow Brick Road, are revealed as strange, pagan, and fully capable of cruelty. While Farmer fans and those looking for radical re-casting of classic tales will enjoy this, if you can only bear to see Oz through the lenses of childhood nostalgia, you may want to go cautiously.

Email ThisBlogThis!Share to TwitterShare to FacebookShare to Pinterest
Labels: SF, Sword and Planet

THE FRIENDS OF PANCHO VILLA

An outlaw telling the tale of his life and how it intertwined with that of Pancho Villa, the revolutionary, bandit, & warlord of North Mexico, in the upheaval of the Mexican Revolution is apt to have more than a few cynical observations. As in, all his observations are cynical. Rudy Fierro relates his life as Pancho Villa’s right-hand man from the coming of the Revolution to Villa’s death in the 1920s (in fact Fierro is based on a historical figure, one of Villa's lieutenants). Fierro is not interested in revolution as a means for social justice, he’s interested in as a way to be utterly free of any restraints. He kills, boozes, and screws his way across Mexico with absolute abandon. There are no social bandits in Fierro’s world, except by accident. For Fierro is an unreliable narrator, filtering everything though his own self-centered world. He recognizes Villa’s charisma and appeal to the masses, yet survival means keeping to the code of the killers that overthrew the old regime. Indeed Fierro bears little ill-will for the rich and powerful as such, only contempt for their inability to hold on to what they had.

The Friends of Pancho Villa is perhaps less a novel than a running commentary on the nihilism of war. What Mexico endured was less a revolution than an unraveling of society, where violence became the norm, and those who were personally adapted to use it as the first resort were the fittest for survival. Blake views the whole from one skewed corner, yet manages to cut right to the heart of the contradiction that purging society of injustice by violence, merely creates greater scope for injustice.

MY BOOKS AND STORIES